Derek McNeill has been telling visual stories most of his life. The Seattlite first honed his eye working as a photographer in the US Air Force, then worked in advertising art direction and design. He now divides his time shooting his own documentary projects and stock footage. “After carrying around a camera kit for years, telling visual stories is second nature. It was a natural progression from shooting project for clients to shooting projects for myself.”

Derek’s recent documentary, The Road to Nickelsville, tells the story of a homeless encampment’s inhabitants, victims of Seattle’s economic boom.

His upcoming film Appleseeds features interviews with the elderly and “Seeks to discover if happiness is not a pursuit, but a decision we make and cultivate.”

Dissolve: Your models look very warm, natural, and relatable. How do you direct them?

I take the same approach to stock as I do with my documentary work. I use minimal gear, and build rapport by chatting and just hanging out. Models vary in their need for direction – I provide a framework or scenario, then let them be natural within that.

For shots involving devices like smartphones or iPads, I’ve started having them use apps that provoke genuine reactions. I have them shoot actual selfies; I encourage them to actually text friends. 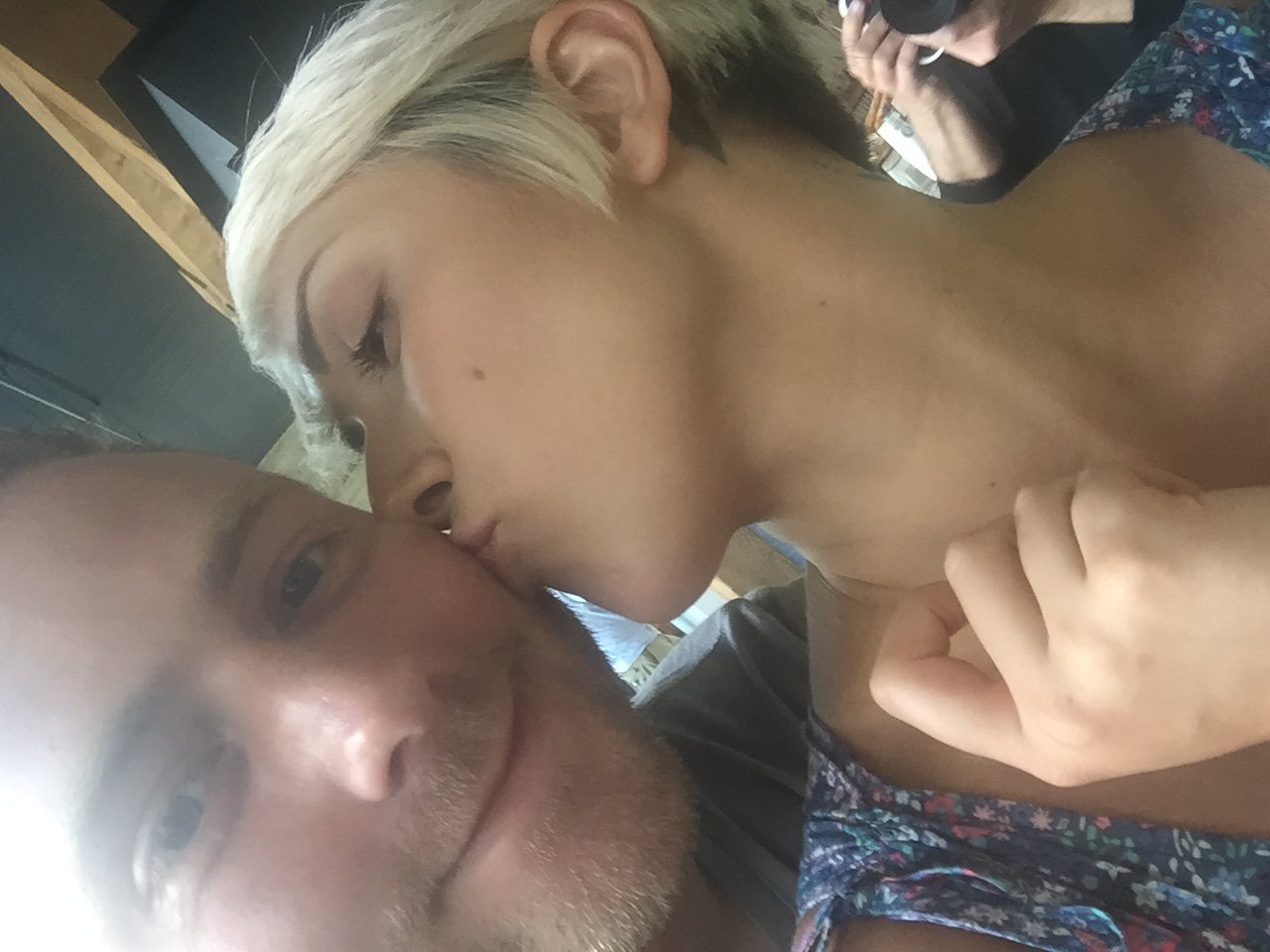 Hand-held shot of a couple taking a selfie, and selfie from shoot

I’m always trying to find the best way to get genuine expressions. With my last shoot I tried a new thing. I would ask them questions, but told them to not answer with words, but pretend they’re mute and answer with expressions. I can get personal, so the reactions so far have been pretty good, even if it’s just them being embarrassed! – it’s still a genuine emotion.

For my technique, it’s all about the eyes. I ask the models not to wear patterns, and have clothes that are neutral in tone as possible. I want nothing to distract from their face and eyes, and the expression to be what draws the viewer in.

Dissolve: What are your most successful clips?

One or two people using devices with an obvious hand-held look seem to be selling the best. I generally shoot the kind of clips I was always seeking as an art director working in Seattle. Because of all the tech start-ups, and big companies like Microsoft, we always needed shots of people using devices in genuine way. The existing stock footage felt contrived and overly produced.

Zooming in shot of a woman looking at camera

One clip, which is just a quiet portrait where I pull in on a woman with shallow depth of focus sells repeatedly. I’m fascinated with tattoos, and tend to use models with a lot of tattoo coverage. Something about watching exotic looking people doing ordinary, everyday things fascinates me.

Dissolve: What kind of gear do you use?

I use a Canon 5D Mark III, and a Lumix GH4 for slow motion. I recently tried a Blackmagic production 4K for handheld, but it proved too heavy. The Canon work far and away sells the best, so I’ll be moving to the 5D Mark IV for most of my future work.

For my docs, I’m looking to move to bigger/better like say, an Ursa mini or whatever, but for stock, the DSLRs are best for the intimate style that’s my little niche. I prefer macro lenses for shallow depth of field, and go back and forth between a 55 macro, a 50 and 100 macro.

As for post-production — I deliver my stock footage raw, but for my docs I like Red Giant’s Magic Bullet Suite. For post I use Film and Looks extensively in my documentary work. It’s great for shedding that “video look.” It’s incredibly powerful software, and I think an amazing dollar value for what you get.

See all of Derek’s clips on the Dissolve site.

Tags: Shooters
PreviousMeet The New Park Next Achieving the MMUUULLTTIIPPLLY effect in Adobe® After Effects™

END_OF_DOCUMENT_TOKEN_TO_BE_REPLACED

Graphic designing has become quite a popular career choice. Small and..
END_OF_DOCUMENT_TOKEN_TO_BE_REPLACED

Create without the cost and hassle of an Adobe Creative Cloud..
END_OF_DOCUMENT_TOKEN_TO_BE_REPLACED
Ideas RSS