Frame Train: Video editing tips from a graphic designer with an Adobe subscription and no training

You know when you’re brainstorming and someone says, “What if we did this [cool but not fully formed idea]?” And somebody else says, “Yeah! And how about if we took that and did this [other cool but still not fully formed thing]?”

That’s what this “How about … ” series is. It’s where our creative team experiments with ideas we’ve kicked around or cool techniques we’ve seen. It may be messy, definitely not fully formed, but we hope it will get your own “how about …” wheels turning.

Oh hi! I didn’t see you come in. How are you? I’m fine. Got any cool plans for the summer?

So you are curious how to get that “Frame Train” effect? There are actually a couple techniques going on in this video:
• Reverse motion stabilizing of locked-off shots
• Match-cut wipe transitions (I think that’s probably what people call them. Don’t Google it, just believe me.)

Step 1: Get the footage

Part of what makes “Frame Train” distinctive is the locked-off shots of people moving horizontally through the frame. Ideally the camera is totally immobile, and the subject begins (and ends) their action completely out of frame, with a few seconds of padding on either end.

You can shoot the footage yourself if you have a couple friends willing to walk in front of your camera. If you find yourself friendless, however, you can license locked-off clips from Dissolve. Tell ’em Drew sent you. It won’t get you a discount, but I bet they’d like to know if anyone read this blog post.

If you really want this blog post to deal with the nitty-gritty of stabilizing footage, this is literally the first video that came up when I searched “stabilize motion after effects” in YouTube.

Pretty good, right? Now do the opposite of that!

You’ve seen the Stabilize Motion function in After Effects used to eliminate some unwanted camera shake from footage. But for our purposes, we’ll be taking unshaky footage and stabilizing a moving subject (our example features this cool vacation spaceman): 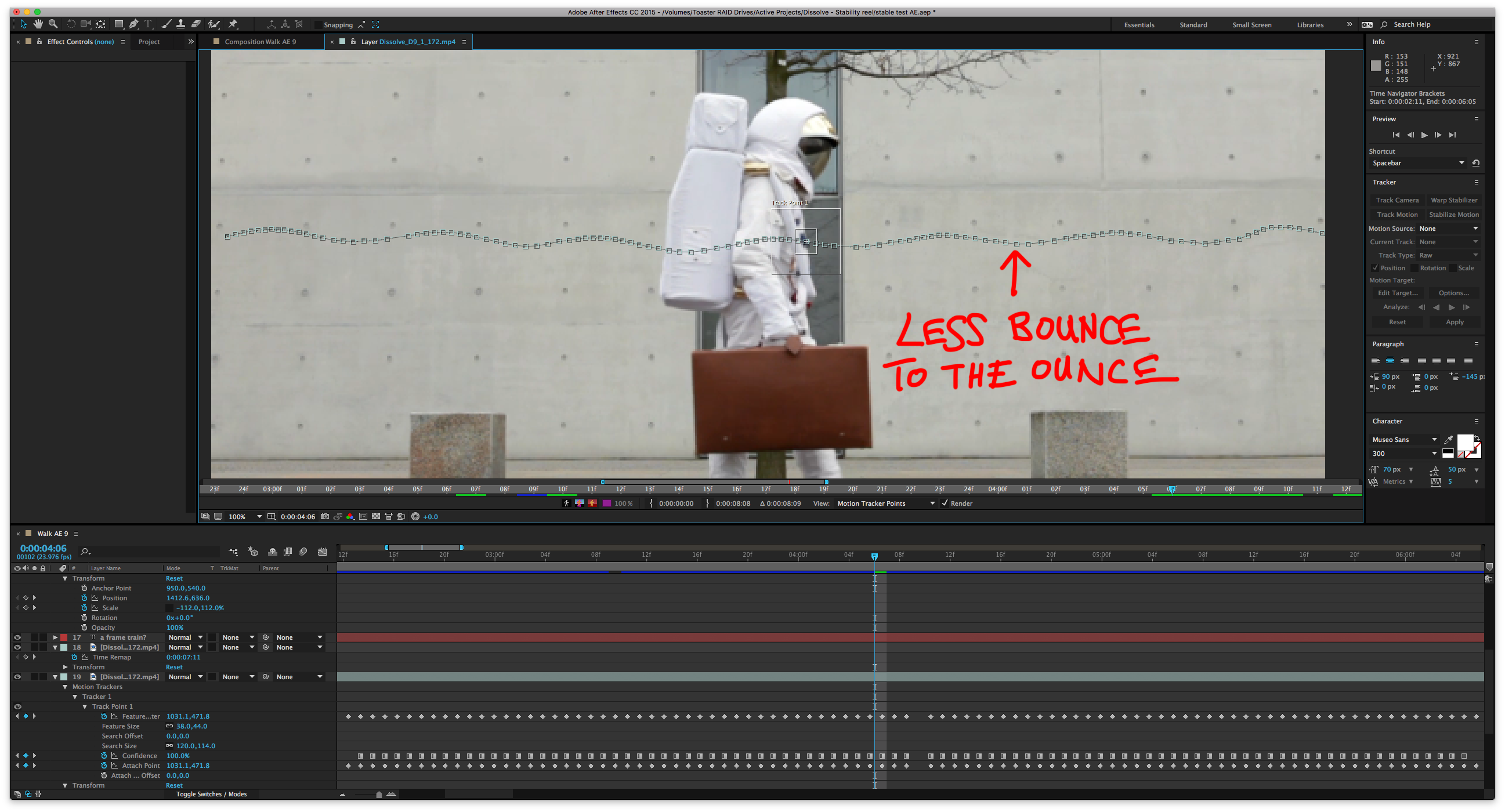 You’ll notice he bounces up and down a bit as he walks, but all we care about is the horizontal motion. So when you apply the motion tracker, select only Dimension X.

After you’ve applied the motion tracker, your footage probably jumped almost completely out of frame. Just drag the clip horizontally until the subject appears in the center of the frame. He should now look sort of like Fred Flintstone running in place while the background whizzes by.

Now that the spaceman is all set up, let’s turn him into a skeleton! Our animated skeleton clip is already walking in place, but if we wanted to transition the spaceman into another locked-off clip, we could just repeat the above steps. In order to fake our reverse motion stabilization effect with the skeleton, I simply applied a mask to replicate the movement of the subject from one side of the frame through to the other.

The spaceman/skeleton transition provided another little challenge: there wasn’t enough spaceman footage to fill up the time it took for the skeleton footage to reach the edge of the frame! As luck would have it, using locked-off footage of concrete allows us to simply freeze-frame the end of the clip, and move the still out of frame (the rate of movement will be dictated by the walking speed of the subject). 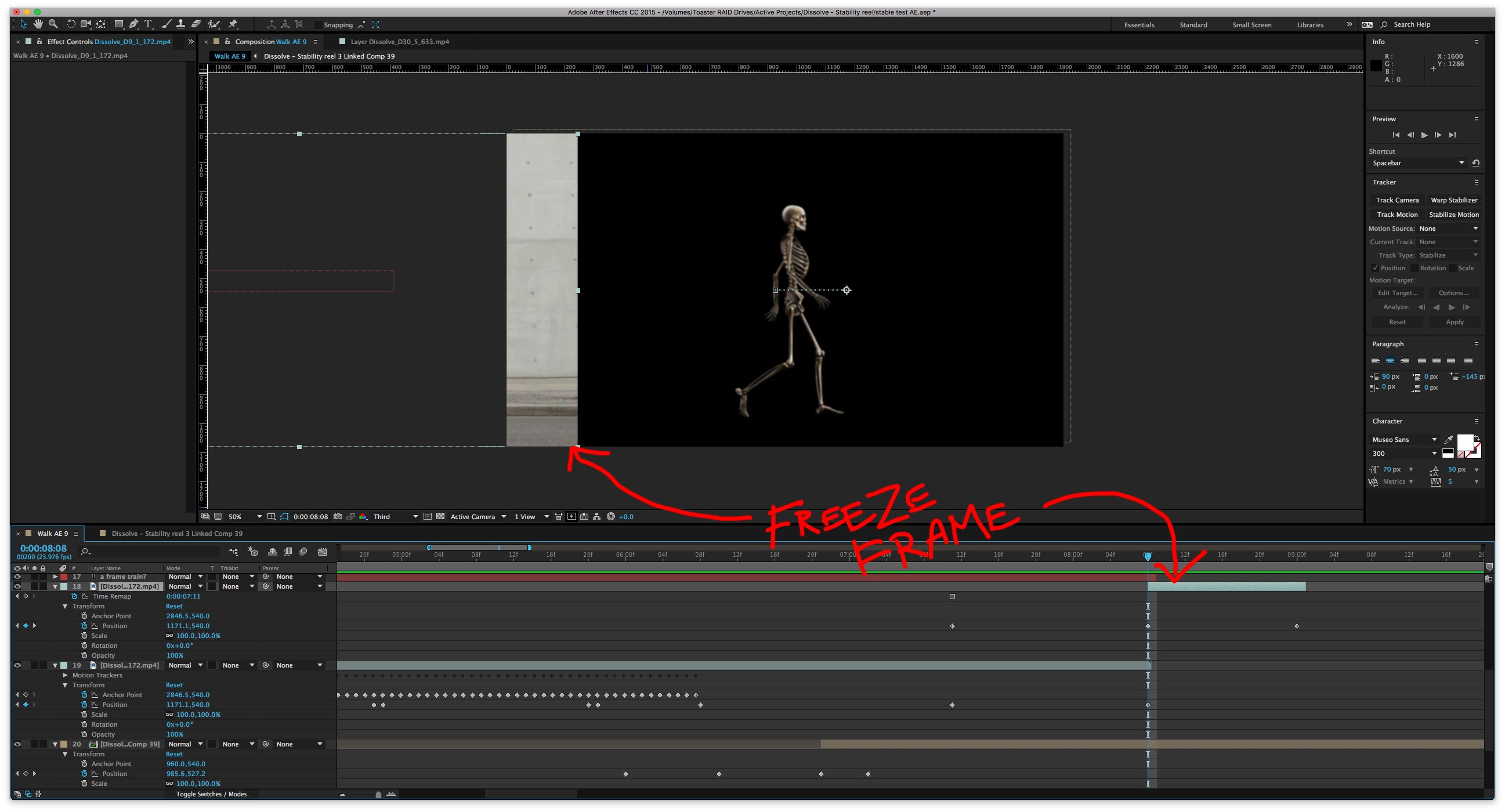 And that is how “Frame Train” was hacked together! I guess there was some other little stuff too, like how Skeletor slowly changed scale and position to better align with Lawnmowerman, or how cropping the 4K clip of the woman walking through Iceland gave us extra flexibility with scale and timing, or carefully choosing footage with similar movement speeds. But that stuff is boring!

There’s also something called “J-cut” and “L-cut” transitions happening, but who cares about audio anyway?! Actually the people at Soundsnap care a lot and they’re great. We got all the audio effects from them.

Oh, I almost forgot to tell you guys. Obviously footage comes in a bunch of different frame rates — “Frame Train” is at 23.97 fps, but some of the footage I used is 25 fps. For reasons related to math or something, just plopping in footage of a different frame rate can create an ugly, stuttering effect. At first I resigned myself to making some frame-by-frame adjustments, which I painstakingly did the first couple times. 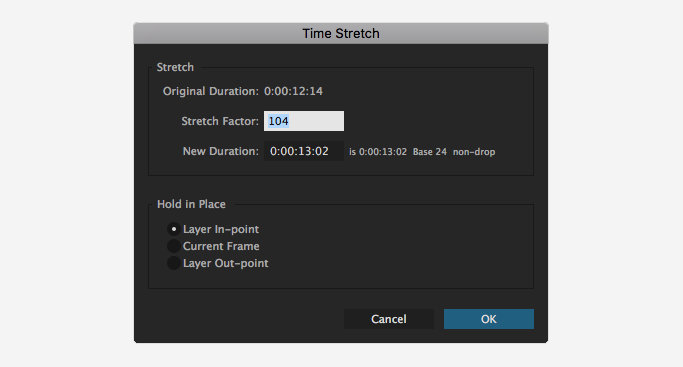 How about you? Any tips or tricks to share when stabilizing? Leave ’em in the comments!

See and license the clips used.

Tags: Tips, After Effects
PreviousCommon shot types and how to use them Next Dissolve for a Cause supports 350.org

END_OF_DOCUMENT_TOKEN_TO_BE_REPLACED

Graphic designing has become quite a popular career choice. Small and..
END_OF_DOCUMENT_TOKEN_TO_BE_REPLACED

Create without the cost and hassle of an Adobe Creative Cloud..
END_OF_DOCUMENT_TOKEN_TO_BE_REPLACED
Ideas RSS